You are in Home > About us > Founding members 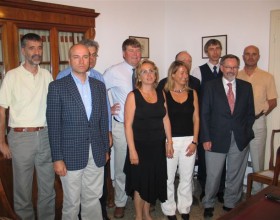 Stephen has spent more than 30 years in the professional amenity industry in the UK and France.

He is currently responsible for the Marketing and Development activities of the company in France and further afield.

Adriano Altissimo – Agronomist at LandLab Studio Associato, Vicenza, Italy. Since 1990 he focuses his scientific attention on turfs, working for private companies and participating in research projects in partnership with academic institutions such as the Universities of Padua, Italian Institute for Vineyard, the Plant Nutrition centre of Rome, Agronomy departments of the Universities of California, North Carolina, Kassel. His research fields spread from organic and mineral fertilizers, and are now oriented towards low impact agriculture, by means of turfgrass test, mixtures evaluation under various conditions, technical support to sod producers. Member of ASA – American Society of Agronomists – and ISHS – International Society of Horticoltural Science, his approach to agronomy is meant to share, research, grow up with people of different ages and with different professional experiences, with the aim of working for stable, simple, efficient and low impact systems, paying particular attention to renovation and preservaion of natural resources.

Stephen Baker – joined the STRI in 1980 and is now Head of Soils and Sports Surface Science. He has co-ordinated research projects for most of the governing bodies of sports in the United Kingdom including the R&A for golf, the Football Association and Football League, the Rugby Football League and Rugby Union, the England and Wales Cricket Board, the Jockey Club and the British Greyhound Racing Board. He has also received research funding from the United States Golf Association and the Netherlands Golf Federation. This extensive research programme has lead to over 250 scientific, technical and popular publications and three books dealing with sands, rootzone materials and golf green management.

Stephen has been a member of many committees involved in the sports turf industry and was leader of the UK delegation covering natural turf surfaces for the European Committee for Standardisation and leader of the European golf course task group.

He carries out specialist consultancy and testing work on both natural and artificial turf, including projects in Scandinavia, the Netherlands, Saudi Arabia, Barbados and Malaysia. He also lectures extensively, including recent conferences presentations in Australia, New Zealand, the USA and Canada. Dr Baker is a director and historian of the International Turfgrass Society and received the National Turfgrass Foundation Research Award in 2004.

Stanislav Hejduk –  born in 1971, lecturer at Mendel University of Agriculture and Forestry in Brno, Czech Republic since 1998. First contact with Turfgrass management was during lectures of Professor F. Bures in 1995. His background is Grassland management.

Klaus Müller-Beck – Dipl.-Ing. agr. Age group of 1947, degree in agricultural sciences at Bonn university. Handling of research assignment conc. examination of turf with regard to soil structure and plant composition in Germany at the Bonn Institute for plant cultivation, graduating with a major in Dr. agr. Since 1985 responsible for vegetation-technical consultation of Sports turf and Golf greens at COMPO, Münster. Member of research group fertilizer as well as member of CEN-TC 260 i.e. European standardization of fertilizers. Chairman of the German Turf Society DRG since May of 2000, following active serving on board of directors for many years. Educator with the training of green keepers at DEULA college in Kempen. Member of the examination committee for greenkeepers at the Chamber for Agriculture in Northrhine-Westfalia since 1989. Educator Member of “Golf Course Superintendent Association of America” (GCSAA) and active member of Board of Directors of “International Turfgrass Society” (ITS). Technical writer for “Greenkeepers Journal”, the publication of Germany’s Association of Greenkeepers (GVD). Various publications on subjects such as “turfgrass”, “installation and maintenance of turf”, “supply of nutrients and fertilization” as well as “training of greenkeepers” and “development of golf green industry”.

Alexander Richter – was born the 14th August 1963 in Vienna, Austria, in a family of sodgrowers since 1906. In 1986 he started to work in Richter Rasen Company from the bottom, since 1999 he’s Managing Director. He is involved in research for subsurface aeration, modular turf and subsurface heatingsystems with enriched warm air at Michigan State University and he is a supporting member of many turfgrass research institutions such as International Turfgrass Meeting ( Intl Rasencolloquium founded 1968), Fördererkreis Giessen Germany, Deutsche Rasengesellschaft, University Hohenheim Stuttgart Germany, University Weihenstephan Bavaria.

Gerard Van’t Klooster – With a background in horticulture, Gerard started to work as turfgrass breeder for the Barenbrug company in 1986. Breeding goals were trends as wear tolerance for sport, wear tolerance under shade, close mowing of red fescue and perennial ryegrass for the golf courses use, drought tolerance, winter hardiness and salt tolerance. A breeder is focused on cultivars, but in the real world mixtures are used. So Gerard started more and more trials with mixtures. In 2000 Gerard moved with the family to the USA to set up the Barenbrug USA research department and a selection side on the East coast.

The setup of this project was ready in 2003 and they moved back to Europe to start-up the European Product Development for Barenbrug Europe. Since May 2008 Gerard is working for SGL BV, The Netherlands. He is member of German Turf society, International Turfgrass Society, America society for Agronomists (ASA).