You are in Home > News > 5th ETS Conference Summary “Turfgrass – Towards Sustainability and Perfection for Aesthetic, Recreational and Sports” 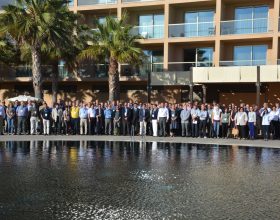 The 5th European Turfgrass Society Conference, a biannual meeting, was held at the Salgados Palace Hotel (Salgados, Albufeira, Portugal) between June 5th – 8th 2016, under the responsibility and organization of the University of Algarve.

Scientifically this meeting was divided in seven main topics:

Regarding the participation, although the economic problems that most of us are facing nowadays, 115 participants were involve in this scientific programme. These participants came from 21 countries, from Europe, America (North to South), Asia, Oceania and Africa.

The first two days were dedicated to plenary sessions where more than 80 oral communications and posters were presented and discussed in those seven thematic sessions. The third day was a technical tour where sustainability was the main focus, respectively 1) at a golf course which is totally irrigated with treated wastewater (The Herdade dos Salgados golf course), 2) at a golf course project approved after a long environmental study has been done (Quinta da Ombria, Loulé), and 3) at a Bermuda sod farm.

On the second day, the ETS had its General Assembly where a new Board was elected. For the next four years, the actual ETS Board has the following members:

To the former ETS Board, a special word: Thank you for your commitment to the association.

A special acknowledgment to Messinagro, Syngenta, Itelmatis, Novarelva, Bayer, Sapec, the Portuguese Foundation for Science and Technology,the Luso-American Development Foundation, and the Algarve Tourism Officefor the financial support given.

Click the link below for some photos from the Conference:

Legnaro, 02/11/2023   Dear ETS Members and turf friends, As President of the European Turfgrass Society (ETS), I would like to inform you that our soc[...]